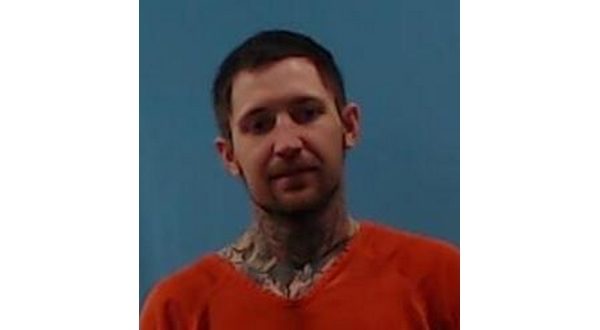 A 30-year-old Harrison man was arrested with three pounds of methamphetamine after a high-speed pursuit last week in Searcy County.

Austin Glenn Angel faces felony charges of trafficking of a controlled substance; felony possession of drug paraphernalia with purpose to plant, manufacture, prepare or repack; fleeing; and possession of drug paraphernalia; as well as misdemeanor charges of reckless driving, display of license plates and driving on a suspended license. Angel also received penalty enhancements of being a habitual offender.

According to a news release from the Searcy County Sheriff’s Office, the pursuit began when a Searcy County Deputy attempted to pull over Angel’s vehicle on U.S. Highway 65 near Marshall for an equipment violation. Angel allegedly started to pull over, but took off at a high rate of speed. Marshall Police joined the pursuit and authorities were able to contain Angel’s vehicle, but Angel lost control, traveled off the roadway and struck a tree.

Angel attempted to flee on foot before being detained. Authorities learned Angel was driving on a suspended license and was wanted by the Arkansas Parole Board. Authorities allegedly found several white pills in the man’s pockets, and then located a bag containing a crystal-like substance in his backpack. A search of the vehicle located more evidence, including large amounts of meth and cash.

Authorities say a passenger in the vehicle, Jessie Gregory, was also wanted by the parole board, but was taken to North Arkansas Medical Center in Harrison via ambulance for treatment of an injury sustained in the crash.