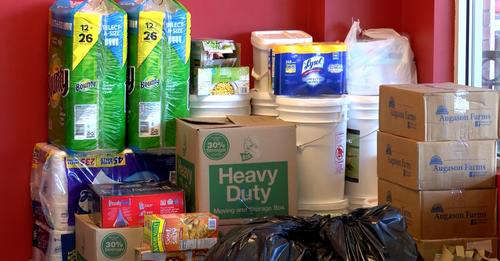 Paul LeBlanc is originally from Houma, Louisiana. When he first saw that his hometown was decimated, he knew he had to find a way to help.

“I went down for Katrina and helped work with that,” said LeBlanc. “I was on the fire department. Same thing with Joplin so I’m no stranger to major incidents, but this one was different because this is where I grew up. It’s where my family lived. It’s where my friends lived. So when I was watching this on Facebook Live, it was just different and I knew that I had to do something whether it was a small part or whatever it is I could do. So I decided to open up my business as a spot for donations to come in.”

Donations can be dropped off at OutRaged Rage Room, 4360 Gretna Road (at The Shoppes at Branson Meadows) from 4 p.m. to 10 p.m. Monday through Saturday.

“We went down with a 26ft long trailer and a 12ft long trailer. We had to rent a U-Haul because we had so much stuff on our first trip,” said LeBlanc.

And LeBlanc said he’s not stopping anytime soon. He is collecting donations as we speak for his next trip sometime next week.

We’re going to continue to collect donations and go down as much as it’s needed because this is going to be a long process,” said LeBlanc. “It’s going to take a while before folks will be able to kind of relax because people left and came back to nothing but a foundation instead of their home.”